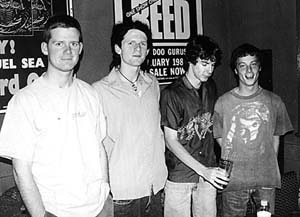 XPOZAY band comp winners COZMIK have changed their name to AUDIOPHILE in a move intended to reflect the group's evolution in musical styles.

Playing this Saturday night at The Cambridge with PURPLENE and DEATH IN MONARO COUNTRY, Audiophile has begun tinkering with a Roland SH101, adding some heavy-duty atmospherics to the band's unique wall of sound.

MAT MCPHEE, on bass guitar and effect, said the two-octave keyboard was used to adjust the modulation and pitch of sounds that were fed through it from guitars and sampled sounds.

'The new name reflects the sound we are heading towards,' McPhee said.

McPhee (left) joins the band with his brother, guitarist and vocalist TIM MCPHEE, and drummer MATTHEW ROSSETTI and guitarist ALEX NEVIN. Audiophile will use its Xpozay prize, a recording package at IGLOO STUDIOS, in January. 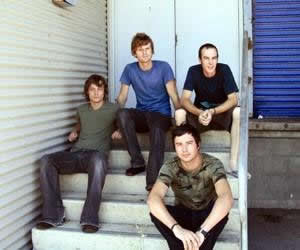 AUDIOPHILE is returning to the live scene after a 12-month hiatus.

But the band has undergone one distinct change.

Audiophile is now performing and recording as The Instant, having discovered there were two other overseas bands using the same name.

The first factor is that the name is already taken in the US and the UK, plus it was kind of a bit of a case of wanting to start up again and start everything fresh.

There was a lot of debate about it. A lot of the people that know the band didn't want us to change our name but I think it's a fitting time to do it.'' With a new name comes a more consolidated sound which, while not entirely removed from the band's previous style of guitar-driven instrumentals, is a step in a new direction.

Our sound has developed quite a bit. The tracks have become a bit more acute and shorter in length. We're kind of getting to the point now.

Having said that, the last track we wrote is like an eight-minute epic that is the most concentrated and potent track we've ever written.'' A limited run of 10-inch singles has been produced and will be released before a new album comes out in May.

When McPhee, Alex Nevin (guitar), Adam Jesson (bass) and Matt Rossetti (drums) play this weekend it will be the group's first live performance in Newcastle since December, 2004. McPhee said they had been ``chomping at the bit'' to get back on stage.

Despite the fact the band's forthcoming album is yet to be released, McPhee said they already had stacks of new material ready to go for the follow-up.

Since we've re-joined, everyone is so much more motivated and really keen. There are just a lot more ideas.

We've got enough tracks for another new record, some of which will feature in the show.'' For the launch show we'll be doing half new material and half from the new record.' Entry to the show costs $8 at the door.