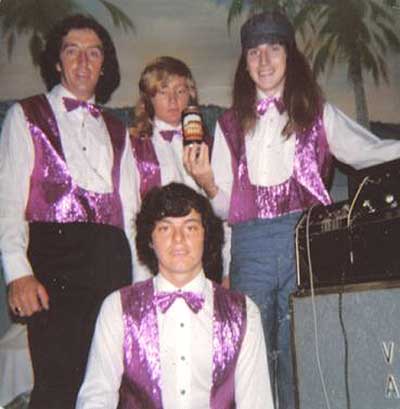 Beginning as a practicing backyard garage band in the mid 70's, Black Stone Myth went on to become a popular fun time Rock and Roll show band act after front man Phil Mahoney was approached by the groups drummer Morris Ham to join the line up.

The band is regarded as a pioneer of tribute bands as they were one of the first Newcastle acts to perform full sets of Beach Boys, Beatles, Elvis and other popular 50's and 60's acts.

At its peak, the band was so popular that they attracted a write up in Molly Meldrum's TV Week Column "Meldrum's Humdrum". The band was also invited to perform on ABC TV's "Countdown" program.

Phil Mahoney approached lead guitarist Terry Wild to join the band shortly after linking up with the original members of Black Stone Myth. Phil had previously played in another band with Terry in 1970 called "Magnus" and was always a big fan of Terry's brilliant guitar playing.

Black Stone Myth were booked solidly around the club circuit and corporate functions in Newcastle and attracted the attention of respected Newcastle Rock and Roll journalist Leo Della Grotta, who featured a half page story and photo of the band in the Newcastle Sun newspaper's "Stepping Out" entertainment page. At the time, The Newcastle Sun was a very popular afternoon paper, so the write up greatly helped increase the bands profile.

Lead Vocalist Phil Mahoney says he was very enticed to join Black Stone Myth because he was very aware of the keyboard player Tom Kennedy who he had seen several years earlier in the Great Hall at Newcastle University at a "Yamaha Keyboard Spectacular", where Tom was the star of the night.

"Tom was a brilliant keyboardist and showman and would jump up on top of his stack of keyboards and play backwards through his legs as good as most people could play regularly. Tom was a big reason for Black Stone Myth's success", Phil recalls.