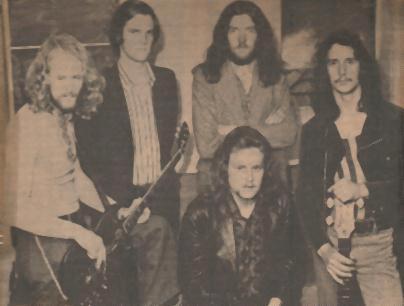 Bogislav was an Armidale-based band with strong links to Newcastle having made several appearances in Battle of the Sounds country finals from 1970. Drummer Ron Carpenter, keyboardist Don Walker and guitarist Dave Frogatt formed the band while studying at UNE in the early 70's. They were joined by Scottish bassist Dave Highet and singer (????) and the band played regularly around venues in Tamworth, Armidale and the university campus dances.

In 1972 the band worked up a heavy rock repertoire of original numbers influenced by bands like 'Bloodrock' and'Deep Purple' with a view to having, as Ron Carpente described it, "…one last crack at the Battle of the Sounds." After winning the Armidale heat and a Country Final their singer quit before their next appearance at the Northern NSW Zone Final. Ron Carpenter called on Tim Crozier (ex-'Lukes Harp') then living in Sydney to join them. After learning the material from tapes, Tim joined up with the band in Newcastle for one rehearsal at the Bus Stop Disco, the day before the Final.

The standard of the finalists was very high with strong challenges from local favourites 'Mata Hari' and 'Armageddon', but Bogislav won on the day. The band then went on to the State Final in Sydney which was won by 'Sherbet' who later won the National Final in Melbourne.

Bogislav continued working around northern NSW throughout the remainder of 1972 and disbanded not long after. Most of the members moved on into other musical projects with the most noteworthy being Don Walker who became a founding member of 'Cold Chisel' several years later.

Formed in Armidale sometime around 1970-1971, the original Bogislav line-up comprised University of New England (UNE) students Ron Carpenter and Dave Frogget, along with Laurie Wheaton, Chris Hales and Rob Barwick. About a year later the band was joined by Dave Highet, who initially provided flute and vocals, before moving to bass after Laurie Wheaton left. Ron Barwick was later replaced temporarily by Andy Richardson. In addition to playing at UNE (including college balls), Bogislav secured regular gigs in Armidale and nearby towns. The band also travelled to Tamworth on a number of occasions. Although heavily influenced by heavy rock and blues acts like Cream, Led Zeppelin, Traffic, John Mayall’s Bluesbreakers and Deep Purple , the band also played classic songs from the era by bands like the Rolling Stones (“Gimmie Shelter”), Chicago and Santana (“Soul Sacrifice”). Brian ‘Lanky’ Moore recalls the band jamming on “Gimmie Shelter” with seminal hard rock band Blackfeather during one memorable Armidale gig. The band also performed numerous original songs.

Sometime in 1972 Chris Hales left the band and was replaced by another UNE student, Don Walker (later of Cold Chisel fame). That same year the Bogislav entered Hoadley’s National Battle of the Sounds, but didn’t play the Armidale heats (believing that another local band, Mantra, was more likely to win). A decision was made to play the Grafton and Tamworth events so as to increase its chances. This paid off because although the band got beaten in Tamworth by Just in Time, Bogislav won the Grafton heats. Around the same time, Andy Richardson left the band and was replaced by Tim Crozier (formerly from the Newcastle band Luke’s Harp). Crozier, who was then living in Sydney, had previously been asked to join the band after Ron Barwick’s departure but that fell initially through. With only a few days notice before the Northern NSW zone final (held in Newcastle), Crozier learned the songs from a tape and had one rehearsal with the band – the day before the event. Despite competing against a strong line-up, notably Newcastle bands Amageddon and Mata Hari, Bogislav went on to win. It then competed in the State Finals (held in Sydney) which was won by pop band Sherbet (which later went on to win the National competition). The 1972 competition also happened to be the last sponsored by the Hoadley company.

Following its success in the Battle of the Sounds competition Bogislav returned to Armidale where it put its high reputation to good use by securing regular gigs through- out Northern NSW. The band is believed to have broken up in late 1972 when several members completed their studies and moved away from the area. Most of the group went on to join other bands either in Armidale or elsewhere, with Don Walker beconing the most well-known after co-founding Cold Chisel in Adelaide the following year. Ron Carpenter also played in an early AC DC line-up before joining former Bogislav members Dave Froggat abd Dave Highet to form Aleph, one of the most popular Northern NSW touring bands of the mid-late 1970s.