If you have just cruised in from the 'Ramblers' or 'Fabulous Rhythm Cats' newsletter
please visit my Newcastle Bands Database site at the link above. 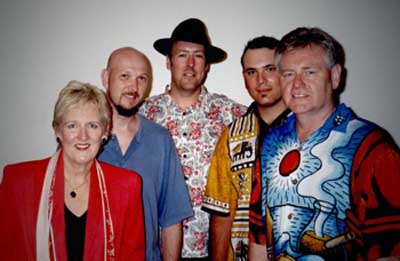 Tim Crozier (ex-Newcastle bands, 'Lukes Harp' and 'Bogislav') continues to sing and play today, some 30 years after his first appearance with 'Lukes Harp' in Newcastle in the late 1960's. After a period of 'retirement' from music in the mid-90's Tim was drawn back in search of the roots of the music he began playing all those years ago. In early 2002 he teamed up with Dave Bowyer (harmonica) to found a Chicago-style blues band, The Boogie Ramblers, based in Sydney. The lineup was completed with the addition of Terry McDonough (Bass), Stuart Wakely (Lead guitar) and Jason Caspen (drums).

The Boogie Rambler's repertoire includes new arrangements of classic numbers from the legends of the Chicago blues scene from the 1940's to 60's including Muddy Waters, John Lee Hooker, Buddy Guy, Willie Dixon, Paul Butterfield and others, complemented by a growing number of new original songs with an Australian blues flavour.

Tim Crozier - (Lead vocals/guitar)
Tim's playing career commenced with Luke's Harp in Newcastle in 1969. After moving to Sydney in 1971, Tim played with a number of bands including Bogislav, The Whispers, (a derivative of Ray Brown & The Whispers), reformed NZ band Creation who had chart success with a remake of Ray Peterson's "Tell Laura I Love Her" in 1975, and a funky 10-piece outfit called Skintight.

Terry McDonough - (Bass/vocals)
Long time ex-pat of WA, Terry McDonough originally trained on piano, but on settling in Sydney in
1978 took up bass guitar, studied jazz at the Conservatorium under Don Burrows and joined all-girl Dixieland jazz band Razzamatazz. Terry played regularly around Sydney in the 1980's and 90's with a number of pub bands and club acts including Creation with Tim Crozier, Margaret Britt ("Peaches"), Roland Storm, Lucky Starr and Bryan Davies.

Stuart Wakely - (Lead Guitar/vocals)
Born in Belfast, Northern Ireland, Stuart started playing guitar at the age of 8 and as a youth worked with Jim Lutton who had played with Elton John and The Rolling Stones. Stuart played professionally in London and Los Angeles before settling in Australia in 1991 and these experiences have helped to craft a guitar player of enormous depth and ability. Appearances with top professional musicians include Brian Setzer (The Stray Cats), Jeff 'Skunk' Baxter (Steely Dan), John Entwistle (The Who) and Jeff Bogert (Jeff Beck Band). 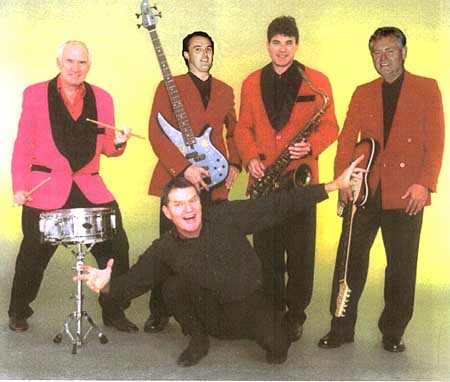 The Fabulous Rhythm Cats have been trouping around the Sydney club and
pub scene for many years, but still maintain a bright, energetic
freshness rarely seen in bands of long standing. Primarily a rock 'n'
roll dance band the Rhythm Cats combine 40's and 50's Rhythm & Blues
roots with an eclectic mix of 50's and 60's rock 'n' roll favourites to
entertain crowds of varying ages.

The addition of energetic frontman George Grundy and his side-splitting
character impressions of many famous faces including, Mick Jagger, Roy
Orbison, Dean Martin, Buddy Holly, Gene Pitney and of course the
inimitable Elvis among others, gives the Rhythm Cats an added dimension
as a popular showband much in demand in the Sydney and regional club
scene. In addition to George Grundy on vocals the current line up
includes Frank Astra (guitar/saxophone); Bill Stace (drums/vocals) Tim
Crozier (guitar/vocals/harps) and Glenn Townsend (bass/vocals).