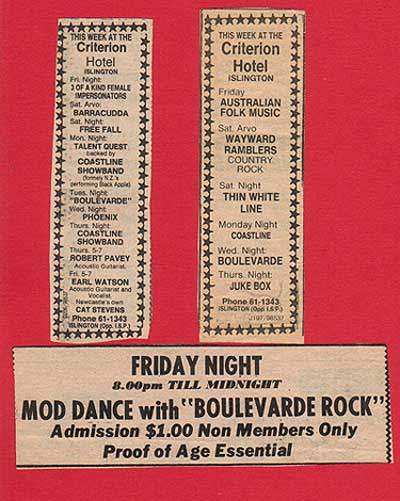 In 1978 three musicians already working in local Newcastle bands at the time struck up a friendship and started jamming. This friendship ultimately saw them form three piece rock band Boulevard in early 1979.

They commenced regular work at various Newcastle Hotels such as the Criterion & Maryville Hotels,Toronto RSL and support roles at venues such as The Ambassador etc.

This three piece line up featured in the final of Raworth's Battle Of The Bands in 1979 at the Civic Theatre........something all three members remembered for many years to come ......as the PA system died temporarily midway through the three song set ....an unexpected experience for all ..... the band just played on through and "came out" at the right spot.......fun, but not how they planned it ! .......

After 6 months of working the local venues, more opportunites arrived and after regular stints opening for high profile acts, the band looked to add a fourth member and change its direction. With this change came all new material, a change of name and image.

Keyboard player James Davis from Maitland joined the trio and the band re-emerged as X Offender with the new song lists comprising of reworked late 60s/early 70s songs, a mix of popular new wave/punk music and again a handful of original songs.

As with all Newcastle bands in the 1970s and 1980s, most of those involved recall these times with much fondness. Happy memories to all that were part of it !