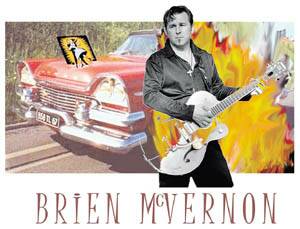 Brien McVernon is a favourite amongst Newcastle audiences.
He has played with highly acclaimed original Newcastle bands such as the 'Phantom Agents','Happy Dials' and 'Lipp System', as well as being a member of the 'Newcastle Conservatorium Orchestra'. With a Bachelor of Music Education degree under his belt, Brien spent a few years in Sydney working as a session musician, as well as enjoying a brief period with the National hit band 'Koo De Tah'.

In 1987, while still living in Sydney, he started working in Newcastle again with a popular cover band 'The Fabulous Colours'. After 12 months, he moved back to Newcastle to become a 'Funbuster', one of Newcastle's most notorious, but successful bands. While Funbusting, he also started up another band 'Raiding Party' for whom he wrote the local top 10 hit 'Loveland'. Towards the end of 'Raiding Party', he put together two more successful acts, 'The Glam Gods' and 'Circus Life'.

The last few years have been spent living in Newcastle still, but travelling from Queensland to Victoria and to the heart of Australian Country Music, Tamworth. He has worked with and supported acts such as 'Graeme Connors', 'Tanya Kernaghan', 'Col Elliot', 'Slim Dusty', 'Angry Anderson' (Angry Anderson '.....Country' ????) and many others.

Brien also released a selection of his original music in his debut solo album in 2000.

Brien, now a true hearted Novocastrian is well loved for his solo shows. With a huge repertoire that swings from classic hits from the 50's to the best of today, Brien can play just about anything and is happy to take your favourite requests.