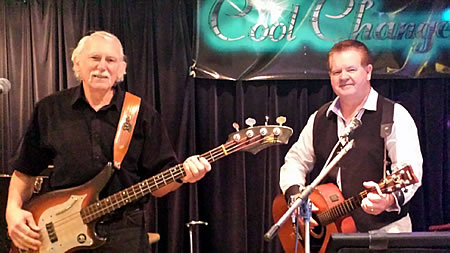 Garry-Owen Doyle: Originally from Belmont, Garry is one of fifteen children and is the son of well known Irish radio personality Kathleen McCartney, who is the cousin of ex-Beatle Paul.

He attributes his musical prowess to his family, being exposed to a variety of musical styles from an early age. Well known and sought after, Garry is held in high regard with his peers and is a great entertainer in the true sense of the word.

Garry is the Lead Vocalist and Guitarist in Cool Change.

John Lightfoot: John is a musician with over 40 years professional experience in bands and in more recent years as a member of the well-known duo Wilson & Lightfoot.

John is also a songwriter and composer and holds memberships with APRA, the MUA and is a professional member of the CMAA.

As The Duo Cool Change: Cool Change formed in August 2005 and when they take the stage performing their unique blend of popular music from the 60's to the present patrons will know they are going to have a great night out.

Presenting famous songs including songs from greats like Elvis, The Beatles, Roy Orbison, The Bee Gees, Neil Diamond and more, Cool Change will move the patrons so much they won't want to go home. Many songs take a nostalgic look through rock's history paying tribute to legends such as Creedence Clearwater Revival, Van Morrison, Elton John and the Eagles.

Additionally, Garry's and John's many years experience has included the performance of all types of country music. Songs by Alan Jackson, Johnny Cash, Willie Nelson, Travis Tritt, Dwight Yoakam, Lonestar, Brooks And Dunn, Kenny Rogers, Vince Gill and The Bellamy Brothers, to name a few, are worked into the set lists to satisfy any requests made by patrons.

Classic Dance music is a strong feature of the repertoire and Cool Change have made a point of providing music specially suited for patrons wanting to attend a venue where dinner and dancing play an important part in the venue's entertainment program.

Cool Change have long been aware that there is a need for quality entertainment within the club industry and are actively seeking out venues where great dining and dancing facilities are available to cater for the growing number of supporters of the duo.