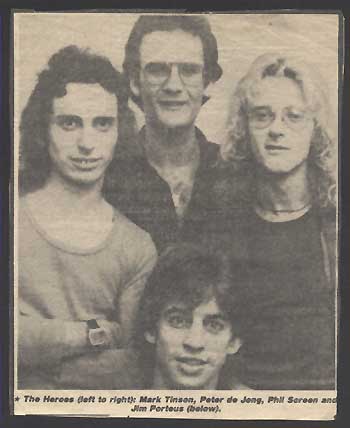 In October 1977, Jim Porteus (bass, vocals) rejoined Mark Tinson (guitar, vocals) and Phil Screen (drums). They dispensed with the tacky 'Rabbit' glam-rock gear, and recruited Peter De Jong (guitar, vocals) and renamed themselves Heroes. The band placed greater emphasis on the music, which was melodic hard rock.
Heroes based themselves in Newcastle, but signed to the Sydney-based Albert Productions. The band's debut album, "Heroes" (October 1980), yielded the singles `Baby's Had a Taste'/`Waiting for You' (August 1980) and `The Star and the Slaughter'/`End of the Road' (January 1981). Heroes were Newcastle's top rock attraction, with both `Baby's Had a Taste' and `The Star and the Slaughter' making the Top 10 there. The album did even better by reaching #1.

Heroes other claim to fame is that they were the last band to play at Newcastle's Star Hotel, the controversial closure of which sparked off street violence and rioting that night. Heroes broke up in 1982. In 1983, Mark Tinson and Phil Screen joined 'Swanee', appearing on the album "Ready for Action! Live in the Snow". They formed a band called the 'Tex Pistols' in the early 1990.
Jim Porteus and Peter De Jong went on to play in 'The Heartfelt Rodneys', 'Cool Factor' and 'Django Wrango'.

Mark Tinson has carved out a career as a successful record producer and session player and Tafe teacher.