Above the Bogey Hole 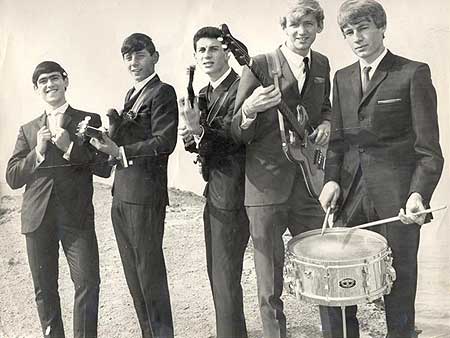 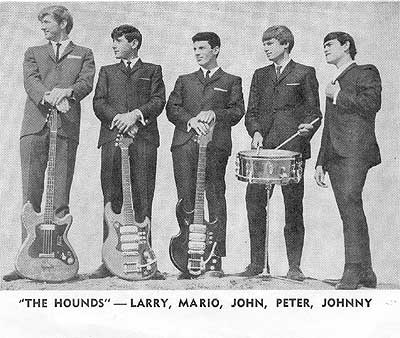 Photographer for above 2 photographs Allan Jolly

From the drummer's perspective

Angelo and his cousin Mario had been playing music originally with Mario's grandfather, Giuseppe D'Andrea. When Mario hit the grand old age of 13 ½, Grandpa DeVitis decided to leave the music to the youngins' and went about his grandfatherly duties. John had always wanted to be a lead singer in a group; and the fact that he knew Angelo from school, formed a band with Angelo on rhythm guitar and his younger cousin Mario as the lead guitarist. They met a drummer named Jerry, who was a tad older than John and Angelo; and started performing at weddings and dances around the Newcastle/Wallsend area for several months until Jerry decided to move on - leaving them "drummer-less".

The lads wanted to form a new band consisting of a lead vocalist, lead, rhythm, and bass guitars and of course, drums (just like Cliff Richards and The Shadows). One Spring Saturday morning in 1964 they placed an ad in the Newcastle Morning Herald for a drummer and bass. I answered the ad and was invited to an audition in John's garage located on Kemp Street, Hamilton. As I set up my drums a young lad of 13 turned up on his bicycle and was introduced to me as their lead guitarist, Mario. I must confess that I thought they were pulling my leg...how could a lad so young be a lead guitarist! Mario and John watched as Angelo and I played "Wipe Out" and "The Rise and Fall of Flingel Bunt". Unfortunately nobody answered the bass call. Minus a bass player, we headed for a gig above the ambulance station in Wallsend that night.

Though I'd played with other bands before, playing with the lads for the first time was quite the experience. The one song that stood out in my mind was their rendition of "I saw her standing there"; with an unbelievably animated John singing his heart out in sync with Angelo leaping around the stage while Mario cranked out a gigantic guitar solo while simultaneously jumping in the air, spinning around and screaming at the top of his voice. I thought, "Blimey, I've struck gold here!"

We started rehearsing in a scout's hall in Mayfield then Merewether; and our repertoire grew; regrettably without a bass player. Once again an ad was place and we were introduced to Ron who was a very experienced bass player, but a good bit older than us. Ron lasted a couple of gigs when we met a lad named Keith from Shortland. Keith was in the planning stages of getting married and couldn't really commit to rehearsing, so we parted company after a couple of months.

We decided to get very serious about the music scene and attended the Conservatory of Music to learn the fundamentals. (Unfortunately) we were invited to appear on NBN 3's rock show that aired on Saturday evenings; so the lessons were dropped after a short period of time. NBN did two shows every Saturday - the first live and the second taped for the following week. A band called the Cherokees from Melbourne performed their two hit songs, "A Woman with Soul" and "I'll give you Love" both on the "GO" label, G 5028-A and G 5028-B, respectively for the live show; and we did "It's all over now" and the "Old Oak Tree" for the taped show.

We had quite the network within the band as John furnished the suits from Rundles (the store for men and their sons) where he was a junior executive, Larry worked at the Newcastle Morning Herald, and arranged the photos for advertising; and Angelo cut our hair. I could arrange steel ingots from the BHP if we needed them, but there was never a call...and Mario was in charge of "early marks" as he was still in school! The first two photographs that appear in our section of the 60's scene were taken above the Bogey Hole by one of Larry's colleagues, Allan Jolly.

We were introduced to a club on Hunter Street by John's grandfather that was named after an ancient Athenian historical site. The club had misplaced the necessary permits to serve Coca-Cola and was a regular target of the local constabulary. Sunday nights found the club empty, so we did the first night buck-shee; however, that particular night they had their biggest crowd ever and the boss paid us! Sunday nights became our regular gig for years and was SRO.

We played at most of the venues in and around Newcastle including the Palais, City Halls of Newcastle, Cessnock and Maitland, Shindig Village, Toronto Community hall, Stones Federal Hotel, and many other places that I just can't remember! We only lasted one weekend at Stones Federal Hotel (which was supposed to have been a regular gig); however, somebody dobbed us in to the authorities regarding Mario not being of age. Mario took the initiative and went before a magistrate with his parents to plead his case, but to no avail. We also performed at a couple of "Sand Shuffles" at Nobby's and Newcastle beaches - all good fun. One night returning from Cessnock, Mario and I were almost involved in a head-on crash with another car on the Hexham straight. The other driver, who was on the wrong side of the median, never did stop.

We participated in two 'Battle of the Bands' - one at the Newcastle City Hall and the other at the Broadmeadow Bowling Alley. It was decided that these "Battles" were a foregone conclusion before we set up our equipment; so after the second one we decided not to participate in them. The old line of, "Think of the publicity" didn't work on us anymore; and I'm sure EVERY band has heard that line!

We'd met our share of celebrities and one I remember was Jon Kodas, a talented hypnotist who entertained managing us at one stage. Jon performed mostly in and around the Newcastle area; however, in between his Broadway and West End appearances, was a night-watchman at the BHP, Port Waratah. Larry and I went looking for him one evening and were told by the head bloke at the main gate that we could find Jon hypnotising the mosquitoes down by the Hunter River.

The band stayed together for a couple of years and like all young lads grew impatient that we never made it past Newcastle - not that we weren't grateful as playing around the Hunter Valley has given us all very fond memories. Unlike today, Australian music in the 60's never garnered a great deal of global recognition. I was the first to leave and headed off to England. Larry was called up for national service in 1967; and one by one we went our separate ways. Mario went on to play with "The Midnight Soul" and later formed a group called, "An Orange" with Larry Parker and Garry Wilson on drums.

Where are we now?

John was the entrepreneur of the group and it was no surprise that he became a very successful businessman. He lives in Newcastle with his wife and family and has retired from performing.

Mario won the "Mo" award in 1976, with Johnny O'Keefe naming him the "Best new act Award" thus opening the door to TV and the Sydney, Melbourne and Brisbane club scenes. Two years later he went to Los Angeles and finally settled in Las Vegas. He met Berry Lee, an Aussie Comedian who had been living and working in Las Vegas for a long time and through him, arranged an audition with the Silverbird chain of Casino's. He landed a gig for two weeks at the Silver City Casino on the strip; which turned into 13 months. It was during this period Mario met his wonderful wife Sandie. They live in Las Vegas and frequently visit Australia with Mario performing at clubs and cruise lines. He also spends as much time as possible with his parents in Hamilton.

Angelo bought the hairdresser business; however, moved in to construction later. He did play in several bands after the Hounds performing mainly ethnic music. He lives with his lovely wife Lucia and family in Hamilton. Angelo has always been interested in producing and repairing precision guitars in his workshop (the only garage I've seen with carpet on the floor!). Through a very sad and unfortunate circumstance, he met and has maintained a friendship with Hank Marvin of "The Shadow's". This is quite fitting as Angelo has to be "The Shads" biggest fan. Angelo is an articulate and skilful artist who has recorded several CD's dedicated to works of Hank and company. To this day, he can be found working in Joe's guitar shop on Hunter Street.

Larry lives with his charming wife Suellen and family in Hamilton. Suellen is the daughter of radio icon, Pat Barton of 2KO, Newcastle. Suellen has met stars such as The Bee Gee's, Billy Thorpe and the Aztecs, Ray Brown to name a few; and has an autograph collection that most music aficionados would only dream of. After 327 years service, Larry retired from the Newcastle Morning Herald and became a coast guard officer for an additional 89 years before disembarking to full-time retirement. Their son, Larry Jnr. has followed his famous grandfather's footsteps and can be heard on WKRP in Cincinnati.

After the Hounds I moved to London and eventually settled in Toronto, Canada where I live with my two children - well, young adults now! I've played in an Aussie Bush Band performing ethnic music and rock 'n' roll for the last 30+ years performing all over North America. We did a lot of work for the Government of Australia, Wine growers of Australia/the world; and the Canadian Broadcasting Commission and many, many others.

Playing in a band is probably the best experience a young lad can have as it really teaches you how to work as a "team", to use an overused metaphor. A band plays much better when they have an enthusiastic audience; and we had plenty of them! So on that note, the band would like to thank everyone who supported us over the years as it was a blast! To echo the words of one of Australia's greatest singer/songwriters, Kevin Johnson -Rock & Roll I Gave You the Best Years of My Life...

Battle of the Bands 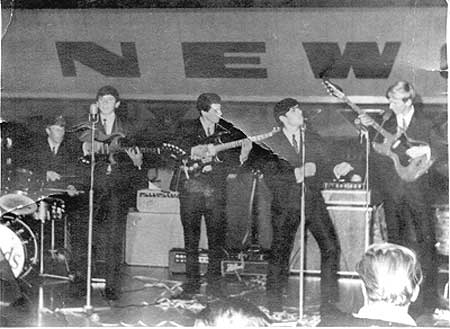 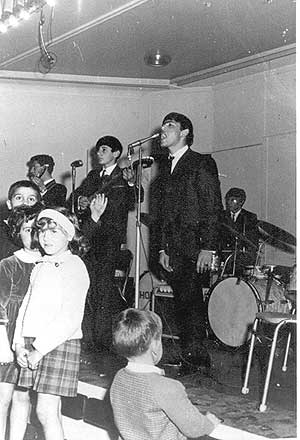