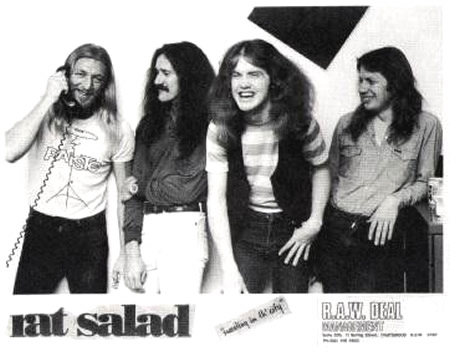 Rat Salad was a fiercely independent Blues Rock Band that oozed with confidence and employed a never -take- no-for-an-answer and I-did-it-my-way attitude which served them well onstage and off.

Hailing from the then tough steel town of Newcastle Australia, and living an almost nomadic lifestyle on the road, they toured relentlessly through 1979 - 1984 and enjoyed legendary status in many areas.

Few bands of the time had the crowd-pulling power or could create the excitement that a Rat Salad gig could. They blazed Rock `n` Roll trails into coastal towns long forgotten or previously never visited by this standard of act and opened up these towns for so-called major touring bands from Sydney and Melbourne to follow.

The Rat Salad Band was born out of a chance meeting between guitarist Steve Russell and keyboard player Lee "Leeroy" Hammond in an iconic music shop in Newcastle called Rayworths in 1978. Leeroy recalls, "Steve already had the band name and had done a few gigs in the uni scene with good friend bass player Jumpin` John West along with miscellaneous other people. After our musical soiree in Rayworths that lasted several hours Steve asked me to come along and join him. I couldn`t say no." Within a couple of weeks Leeroy had left his current band and formed a musical relationship with Steve.

After several quick line-up changes the band settled down in early 1979 with Alan "Grub" Dews on drums and Grahame "Baby Face" Perkins on bass guitar. This pairing of Grub and Face was to become legendary for both their on and off stage exploits. The result was immediate and Rat Salad began to gather momentum. This momentum quickly grew into a runaway freight train that bulldozed its way through town after town leaving a legion of fans in its wake.

Their musical style was hard edged Blues, Rock and Boogie defined by no barriers. They played covers by people like Robert Johnson, Cream, Johnny & Edger Winter, The Stones, Dylan, Elmore James, Muddy Waters, Bo Diddley, Sonny Terry & Brownie Magee etc. touching every song with a little Rat Salad magic to make it their own. They only released one self-titled vinyl EP LIVE AT THE CHARMHAVEN HOTEL, a Central Coast stronghold for the band. This EP showcased the song writing talents of Leeroy & Steve with 4 original tracks. A further live album was recorded at a far south coast NSW venue called The Tathra Hotel which was overseen by their then manager, TV personality Richard Wilkins; sadly it was never released. Rat Salad also recorded a 4 song EP for Warner Brothers Music with Clive Shakespeare from Sherbet fame as producer; sadly this also was never released.

Success awaited the band on every stage they stood upon yet, despite Rat Salad's huge popularity and fan base, record companies continually overlooked them for unproven slipper wearing Flock of Seagulls' haircut bands from Sydney and Melbourne. This became a contentious issue within the band and they were determined that their long hair, surf, hippie, 60's, 70's look and musical style would stay regardless. 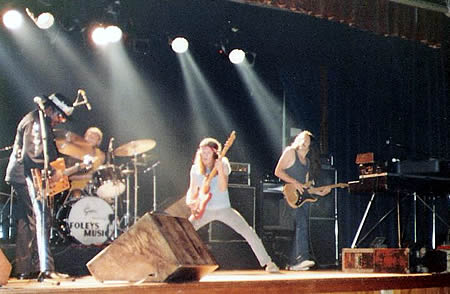 In 1981 Rat Salad's life would change forever when they were asked by Richard Wilkins to become the band for International Blues Legend BO DIDDLEY. They would play with Bo through 1981,'82,'83 and remain close personal friends with him for 27 years until he died in 2008. Bo Diddley loved Rat Salad! Their infectious attitude to playing music would regularly reinvigorate him and Bo Diddley would often make claims in the media such as "I will not walk on stage without my band Rat Salad" and "Rat Salad is the greatest band that I have played with since a little group in the 60's called The Rolling Stones". Diddley offered to take Rat Salad to America with him as his permanent band. To set up base their and record an album with Bo on one side and Rat Salad on the other. He tried to convince them by saying "I would do that for you boys because I love you guys". Rat Salad declined the offer, something the band more than regrets all these years later. 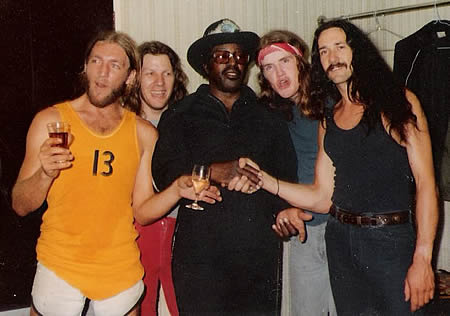 The Rat Salad band members are extremely experienced players in all blues musical formats. After a gig in which Rat Salad played with the Legendary George Thorogood, in a post gig conversation with George, Leeroy claimed that Steve Russell was one of Australia's finest electric blues guitarists. George replied "Damn right!" and testimony to his reply was earlier in the gig how George play-acted trying to stand on Steve's fingers and mouthed the words "too damn good".

Reviewing a live performance at Sydney's prestigious musician's club a writer for Sydney's most widely-read rock magazine "On The Street" Annie Bently wrote, "Rat Salad is an excellent band, they have an ardent rhythm section and smart keyboards that move well with the guitar. They haven't been given enough credit for making Bo Diddley sound good". "If these guys were from the States they'd be huge, Australia sometimes takes forever to recognise home-grown talent".

The band had an enviable party reputation and their after-gig parties were a highly sort after and hotly contested ticket if you could get the invite. Nothing sinister ever happened at these parties and nothing as rock and rollingly glamorous as throwing television sets out of motel windows. Just lots of fun and lots of girls! The band admits that they weren't very popular with lots of daughter's parents along the East Coast. Grahame "the Face" Perkins recalls with a smile, "At the time on the north coast of NSW in the Coffs Harbour region there were 32 motels. According to one promoter that toured the band regularly in the area, we were banned from 28 of them". Bo Diddley claimed in a Perth newspaper interview that Rat Salad drummer Grub was the wildest guy he had played with since Keith Richards of the Rolling Stones.

Three years into a life of relentless touring and 2 weeks before the band was due to embark on an extensive tour of Queensland (which included a 5 week stint at Ceasar`s Palace in Cairns) drummer Alan "Grub" Dews announced that he would not be available. His replacement was Tasmanian Toni "Chopper" Fehldberg. "Chopper" would sit behind the kit for the remainder of the bands life and would be involved in the bands deepened desire to write, record and perform original material.

This has been an abbreviated and condensed look at the Life of the Rat Salad Band. Obviously the days on the road touring with the likes of Bo Diddley, Chuck Berry, George Thorogood, the who's who of the Australian music industry and their own path trodden has supplied the band with a million stories to be told.

There leaves just one question to be answered. After all the band had done, places they had been, concerts they played from small venues like Catho Pub right through to the Sydney Entertainment Centre and with the heavy weight musical names that they had rubbed shoulders with, why didn't this band become more than they were? One conclusion might be Rat Salad was not a commercial band and their my-way-or-the-highway attitude was not attractive to record companies. Their attention was focused on the live performance and having and delivering a good time, perhaps their lack of detailed attention to business was their downfall.

OR, perhaps in the big scheme of things the Rat Salad Band was not meant to be anything more than they had become, one of the finest live blues rock acts ever to have toured the East Coast of Australia. 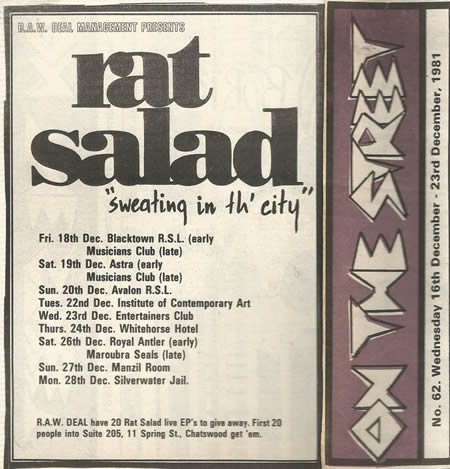 One week in the life of Rat Salad
"We always Loved Manzil Room gigs!
Come to think about it,
we always loved every gig! ..." 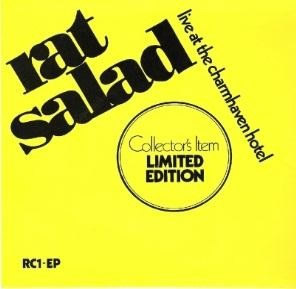