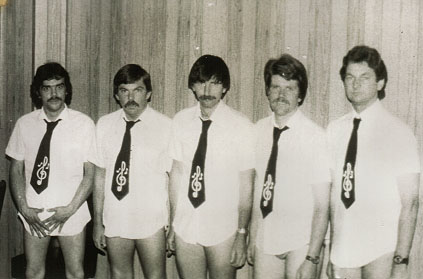 This was a great covers band - the best I've ever been in. Everyone in the band could really play, there was no dead wood. Plus we rehearsed religiously, and Choc was a great singer (bloody Maoris!). We did cruises on the Oriana and supported 'Russell Morris and the Rubes', 'John Paul Young', 'The Swingers', 'Inxs', 'Swanee', 'Mondo Rock', 'Mental as Anything' and 'Gerry and the Pacemakers'.

In 1983 Choc and John both left, so we recruited Larry Shone and Mick Armitt. We did another Oriana cruise, and I think we were the first band to play regularly at 'Fannys', but a year later we folded.