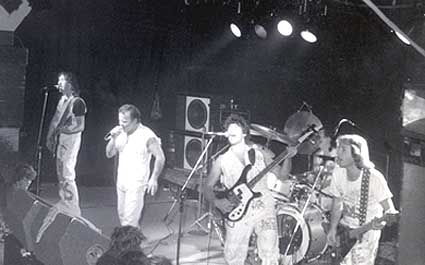 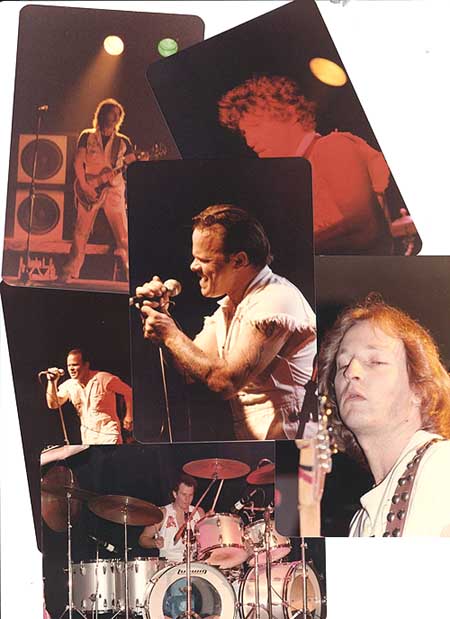 Question: What do you get when you put a couple of 100watt Marshalls, a Jands 600watt head and an 8 x 10 cabinet, some composite bins and a double kit of Ludwigs in a tiny little room in Wallsend with 50 or 60 punters amped off their heads on speed, bourbon, tequila and lots and lots of pot and beer ??

Tinno used to ask if he could come out to The Lemon Grove Hotel at Wallsend and jam with us. He brought Bob Spencer with him a couple of times. They were treated with respect by the locals and got out of the gig intact because they left their airs and graces at Darby Street and just rocked their balls off like everybody else. (Bob never wore his Kaftan to The Lemon Grove). Others werent so lucky. It was a dangerous place to be if you werent "in the know".

Guitarist Stevie MacDonal (Tinno's brother-in-law) transgressed some unwritten law and it was all that Buzz and I could do (assisted by Toddy Walsh) to stop him getting severly belted. He never returned after that night and the door was left wide open to be filled by Trevor Dare. He was perfect. Like us he'd grown up with the repertoire and played blisteringly unashamedly loud.

The ring master of course was Buzzsaw. I've seen him drop a guy with one punch while singing "Let There Be Rock" and not miss a beat. It was hilarious. Even though the pub was directly across the road from Wallsend Police Station there were rarely any real problems. The police (to their credit) simply chose to look the other way unless serious discressions had been committed.

There was a roach tin in the toilet so if you were ever caught short you could whip yourself up an emergencty spliff. I recall an incident taking place which involved C.T. having sex with a girl while she was bent over the toilet bowl throwing up. My quizzical look obviously posed the question "are you fucking kidding or what ??" He started explaining something to do with vomiting and sphynctal contractions and enhanced pleasure and I excused myself and headed back to the bar.

I'm sure Screenie still proudly wears his Anvil Chorus "Lock Up Ya Sheep Tour" T shirt printed up especially for Thommo's 21st. There's a good tape in circulation too with us jamming at Terry Okeefe's home studio..worth a listen if you can find a copy.

In memory of Roselee Adams (ne: Woodbury)
Sadly missed by all who knew and loved her.