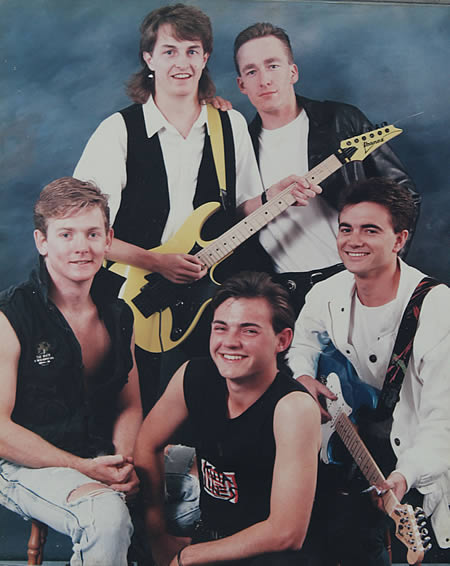 Released a Cassette Single in 1990 titled '10:27', and the flipside was 'Holocaust'. Produced and mastered by Mark Tinson and UJ Neil.

Photograph and Information courtesy of HG

The Lost Boys performed at a number of venues during the Late 80s, early 90s. They had regular spots at Pippis (Speers Point) and Toronto RSL.

The band started out by promoting their own gigs such as Valentine Town Hall, with original vocalist Scott Fry, which drew a large crowd, mostly from the local area, consisting of underage patrons. As a result, police were called when several fights broke out, after the band had finished, no doubt as a result of some underage patrons, consuming an unfortunate blend of alcohol.

Later that year, the band supported 'Just for Laughs’ and 'Rio' at Nelson Bay, in front of a large crowd of ATO employees , at their state Christmas Party. The band then performed at the ’Toronto Spring Fair’ in 1988.

During the course of 1989 the band auditioned for a keyboardist, and a young student from Warners Bay turned up with a Casio keyboard. Josh Callaway, despite being 16 gelled with most band members straight away, and it was obvious that his talent far exceeded the band. Eventually, the band started to move away from it’s top 40 style, and move to a heavier rock style. Scott Fry decided to part with the band, as he didn’t feel comfortable with the hard rock edge, and Josh Callaway took over the vocals. The band started to pick up a few school gigs, and had some of their earliest opportunities at Toronto RSL and Pippi’s. The band was successful at their initial gigs, and despite not having a manager, received a monthly booking for the next 12 months. The band performed also performed at the Toronto Spring fair.

Then in December, 1989 the Newcastle earthquake struck. The band had been booked at Pippi’s Speers Point, and despite the fact most venues were closed, and so many major acts were unemployed, the management at Pippi’s decided to not only retain their services at New Years Eve, but also move them to the larger auditorium. The venue was packed, and the gig was a huge success.

In January, 1990 the band decided to write a song about the Newcastle earthquake, with the aim of raising money for the Earthquake appeal. It was on this day that 10:27 was written, and the band went about recording the song, and distributing it themselves, as 2 band members worked for record stores. The song was initially recorded by Mark Tinson, and later mastered by UJ Neil. The band then duplicated all the cassingles to save money, and were sold through most record store outlets in the Newcastle area. It was also sold at gigs, as well as Warners Bay high (Josh Callaway was still a student)

The song was picked up by NewFM, and made it onto the most requested songs the first week of release. However, the hype soon died off, and the band were unable to make a profit on the single. Not long after, Well known Heavy Metal vocalist joined the band for about a month, taking over the Vocal responsibility from Josh. Steve, despite being well liked by band members preferred to be in a heavier musical environment, and left the band to join Mortal Sin in Sydney.

The band at this stage was picking up extra gigs around the Newcastle area such as supporting The Screaming Jets at Tattersalls, the Bombers (Partyboys) at Cessnock Workers, Kurri Kurri Workers, the Bel-Air, the Jolly Roger, as well as being Runner-Up in the ‘Battle of the Bands’ to established band 'Young Guns’ at the QE2.

The Lost Boys at this stage had also drawn the attention of Marlin Enterprises, and this is when the bands rise to fame took a turn. Marlin booked several venues at short notice for the band, and one of them included a gig at a Pub in the Nelson Bay Area. On the way up, the trailer containing all the bands equipment broke down. As a result, rather than letting the venue down, the band had to fit as much equipment as possible into tiny vehicles, such as Ford Lasers. As a result the band was using foldback speakers as the main speaker system, the gig appeared to go okay with the crowd having an enjoyable night. Unfortunately, the publican was unhappy with the performance and sound, and made it known to Marlin enterprises. As a result, gig started to dry up, and band members lacked the cohesion to continue on with the same enthusiasm they once displayed, with the last gig being at the Gateshead Hotel, which was marred by locals having a major disagreement between local ‘gangs’ inside and outside the venue.