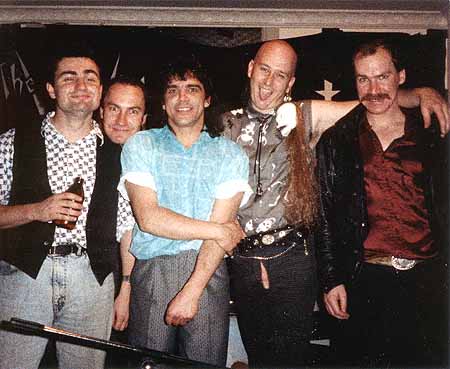 I got off the train from Melbourne at about 10:30pm feeling somewhat worse for wear and in desperate need of a refreshing beverage. I trudged through the empty mall and in the distance could feel / hear the familiar bump-a-bump pulse of a bass guitar. I followed the sound and with each step another tone was added. The screaming and the chunk of a snare drum and wail of a slide guitar mixed over the swirl of a Hammond. Where the fuck was this beautiful noise coming from ? Eventually I found myself at The Family Hotel.

The place was packed with women. Vibrant, voluptuous bouncing women. It was unbelievable. They'd been attracted like bees to honey by the sound and the rhythm and with each beat the Witchdoctors were drawing them deeper under their spell. At first I didn't recognise any one in the band. The guitar player's face was hidden under a huge black cowboy hat. I certainly hadn't seen anyone in Newcastle play slide like that before. The bass player looked solemn, focused, concentrated, in control. The kid on the keyboards was loving all the attention from the ladeez, playing great chops, sweating and smiling, happy as a clam. Suddenly through the billowing smoke (which I realised was emanating from his face) I recognised Chookie on the kit. Playing like a motherfucker..just groovin', locked in with the bass player. Then the other guitarist who had his head down, face hidden behind a shock of curly black hair stepped up to the mike up and sang like....like Choco!!!! Another familiar face.

These guys were awesome.and a million miles removed from the processed sequenced pop Id been playing in Melbourne for the last year or so. And they attracted women to the gigs. The ratio was easily 4 to 1 (women to guys). I wasn't planning on going anywhere. I caught Chookie's eye and he gave me a nod. In the break we caught up and popped outside for a spliff. "What are you doing back in town ?" Id actually come back to help my mum look after my dad who'd had triple by-pass surgery. "Are you looking for a gig?" Always.

Turns out Chookie was leaving the band for the promise of "bigger and better things" (When will we ever learn!?!?) and he was happy to put a word in for me. I was happy to jam that night. Let the lads see what I was up to and possibly enhance my chances of getting laid in the process. But no, the Baillies wanted me to pick up a tape, learn some of their repertoire and audition !?!!? These guys were serious.

Over the next few years I learnt more about feel and swing and bounce and push and pull and being "in the pocket" and playing on/behind/in front of the beat and just a whole new repertoire of ways to play songs and grooves and feels rather than simply hitting drums. I am forever in their debt.

Eventually I moved on to "bigger and better things". (When will I ever learn !?!?)