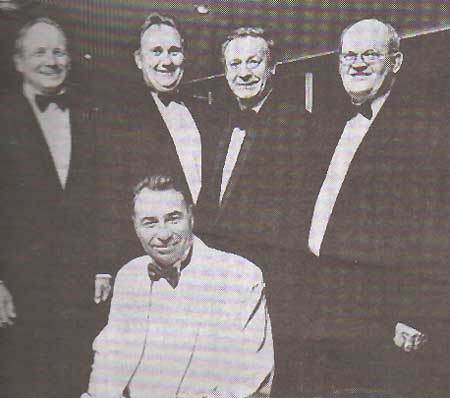 THE Birben Variety Band added the word 'variety' to their name for good reason.

As a variety band, they insist they can handle any venue and satisfy any audience request.

The band's repertoire ranges from Spanish Eyes and Blue Bayou to more recent hits and classics songs from Buddy Holly, Elvis Presley, Tom Jones and The Easybeats. The story of the Birben Variety Band began 20 years ago when member Peter Benson decided to form a group to perform music from the late '50s to the '70s.

After 20 years of performance the group has become a well-polished band which performs anything from easy listening to popular music and roaring rock'n'roll tracks.

Each band member has had years of experience in the entertainment industry, working in bands, duos and floor shows.

Benson said that by adding variety to the performances the band was brought closer to its audience, something which he has always strived for.

'It keeps everyone involved and creates a happier atmosphere,' Benson said.

Benson at Forefront of Band With Two Faces

DON'T think you are mistaken if you notice members of the Birben Variety Band performing in another group with a similar line-up.

The Birben Variety Band is a band with two faces that is sometimes transformed into Peter Benson and the Allstars. Fronting the group is Peter Benson, who has a long association with music and has performed for most of his life.

In his time as an entertainer he has worked alongside Little Pattie, Brian Davies, John Paul Young and Freddie Paris. Benson is backed by the talents of some of the Hunter's leading musicians, who have each had years of experience in the entertainment industry.

Joining Benson from Birben is Peter Pajnic. Pajnic is a skilled guitarist who has performed to, and delighted, audiences around Australia and overseas.

Before settling with Peter Benson and the Allstars and the Birben Variety Band, Pajnic had a successful stint working as a performer on P&O cruise ships.

Benson and Pajnic share the stage with drummer Peter Young, bassist Howard War and keyboardist Craig Gleeson. Peter Benson and the Allstars are heavily involved in talent contests around the Hunter and you can catch the band at contests throughout the Hunter this year.

Peter Benson and The Allstars also perform as a backing group and the band is in high demand due to its professionalism and skillful performance.