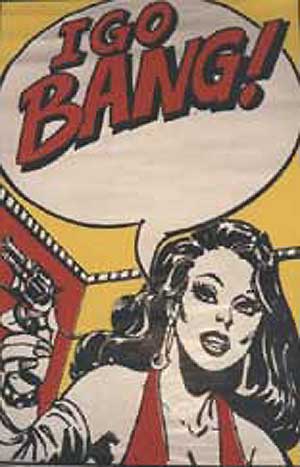 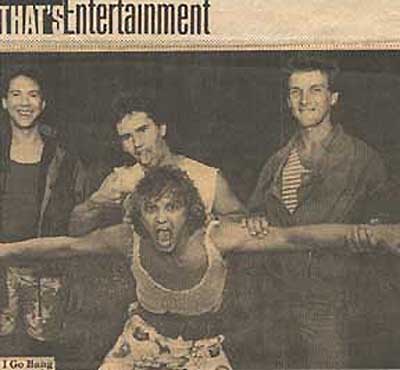 The year was 1986 and 'The Bob Hanley Band' had just about run its course, which was a long and successful one. It must have been around October, Bob had injured his back overseas and was out of action for some months. He had already started to make plans for a solo career.

Richard Boyle was getting dissatisfied singing with 'Nodes Levity' and was keen for a new challenge, so along with drummer Mark Robinson, bass player Kent Jackson, and lead guitarist Chris Reynolds we became a band.

First of all we obviously had to change the name of the band. Richard had come up with 'I Get Scared', but the next day all over the front page of the papers, was a picture of this guy in New York who had just gone into a press conference and in full view of the camera's opened his mouth up, stuck a gun in it and blew his head off.

We thought about using the photo as a poster, but instead decided to changed the name of the band to 'I Go Bang'. We used a comic character with a cute girl holding a gun, it was a fantastic idea by Richard or Kent.

The Warren Druhan Corporation took on the band and Jeff Lewis became our manager. We hired out a rehearsal room above the Jolly Roger and we had about four weeks to at least get a couple of sets together so we could do a few supports.

We started a whole new repertoire with songs that most of us had never played before. In no time at all we became a very tight unit, Kent and I had been playing together for couple of years, Chris was a professional hired gun, and Richard was just outrageous as a front man.

Our first gig was at Fannys Nite Club, we were all a little nervous and excited and from memory certain members of the band curtailed that with a few illegal substances. Richard almost hyperventilated in the band room, but other than that it was a fantastic debut.

The next Tuesday we drove to Muswellbrook for a gig for 40 bucks each, a far cry from the 'Bob Hanley Band' days. We did a few support acts one of the biggest being for 'Spy v Spy' and 'The Angels' at the Newcastle Workers Club. Other gigs included a support at Kurri Workers Club, The Hotel Delany, Beach Hotel Merewether, and Mondays and Saturdays at Fannys.

I remember when we first started playing Fannys we were all dressed in black, I think, and we were told we were too loud. So next time we played there I told the guys we should all wear white, so we don't look like a loud band. Lo and behold we did and it looked great especially on video. Richard was and still is an amazing front man, at the Hotel Delany gig he walked off stage and into the girls toilets, which back then was at the side of the stage. And I remember another incident where this huge guy had Richard in a head lock and dragged him half way down the Beach Hotel stairs whilst still playing.

'Big Bam Boom' had offered me a gig when 'I Go Bang' had just started but I declined because I loved playing with the guys. But three months into the band and after a great Sunday arvo gig at The Beaches Hotel where the band was fantastic, but just didn't go over, I decided to take up the offer with 'The Boomers', as did Kent some months later.

Well that was the original 'I Go Bang'. I believe the band moved on with numerous line-ups so somebody else will have to take the story up from here. 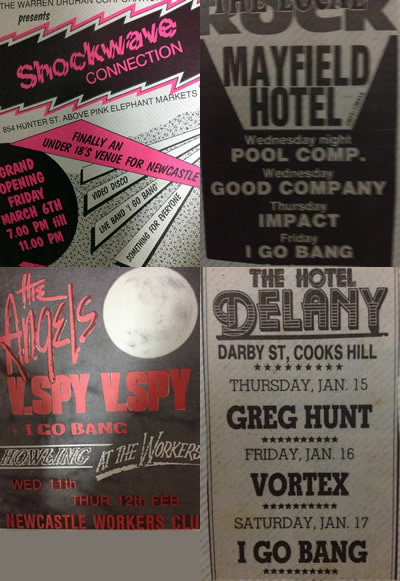 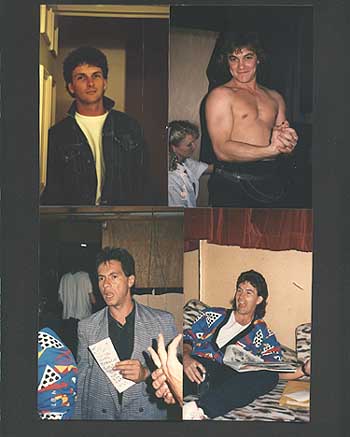