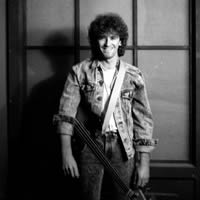 Greg Dawson was my best mate through high school. We were drawn together by our mutual love of music, and we started our musical journey together at the age of 14, 50 years ago. Our first duo was the imaginatively named Gravid.....which morphed into the groovy sounding Static Expression.

Then we got Ross Melville, Kim Murray and Rob Harvey on board and had our first real band - Hot Ice. Greg started out playing bass on a cheap acoustic guitar with the top 2 strings removed and the bottom 4 strings allowed to go dead. It had a cheap soundhole pickup on it, but boy, did he make it sound like a real bass! I'll never forget the day he showed up at my place with his first real bass - a Japanese Fender P Bass copy - we were set to go!!

Our teenage years were spent playing music together and dreaming of one day having a successful rock band and touring the world! Greg's brother Rob had the coolest record collection ever, and we used to immerse ourselves in the heady sounds of Jefferson Airplane's Surrealistic Pillow and Blue Cheer's Vincebus Eruptum along with a healthy dose of Hendrix and Cream - all turned up very loud - the heavier the better! Lol!

We would hang out at the Mayfield Bowling Alley on the weekends in winter, and summer weekends would be spent water skiing at Lake Munmorah. Every Christmas Greg would come camping with my family to Mungo Brush on the Myall Lakes. We'd 'run through the jungle' like a couple of wild bush boys for 2 weeks - they were magical times. We were inseparable, like brothers.

In our later teens we hooked up with Terry Gladdish, John Halls and Lee Spitzkowsky in Badger, and played lots of gigs around Newcastle. By this time Greg was becoming the incredible bass player that he was.

We became separated geographically in the mid '70's when I moved to Sydney, and then the Mid North Coast in the '80's, and Greg stayed in Newcastle. But whenever we saw each other at a friend's BBQ or a gig over the years, it was always the same - the close friendship and affection was always there. A bond like we had can never be broken.

Greg was one of the best bass players in Australia, if not the world, and that is no exaggeration. His feel and tone were impeccable, and every band he played with were enhanced by his presence.

But more than that, he was an amazing human being. Gentle, humble, caring, compassionate, funny, with a huge depth of character. A dedicated husband, father and friend.

The last time we saw Greg was at Mark Tinson's CD launch at Lizotte's, where he backed Mike Rudd. It was just another one of his sublime performances.

The news of his sudden illness and passing last week left me gutted and numb, and profoundly sad. Lyn's and my love and sincere sympathies go out to Lynne, Nikki and the family. We are feeling for you.

Greg has left a huge hole in this world - one that can never be filled. But he leaves behind a legacy of love and music that will be treasured by all those who had the good fortune of knowing this amazing man.

If anyone would like to add a tribute, share a story or memory of Greg
on this page please send it in an email to:
NewcastleBandsDatabase