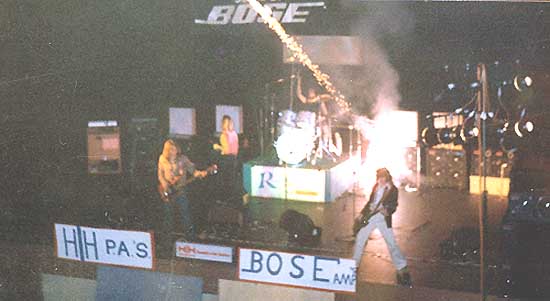 What you are about to read is not a definitive history of the band featured in the bio below. It is a very subjective snap shot of a specific moment in time. It just so happens that I was "there" in that moment and the snapshot was taken from my point of view. These are my memories and any scholar can tell you that memory and history, though related, are not the same thing. I hope any and all readers who can offer a different perspective, alternative point of reference or personal insights will add them to the page. I would love to know what was going on in other peoples heads at the time....these bios are a way for me to assess what was going on in mine. To anyone who feels in any way misrepresented I feel compelled to apologise...however...keep in mind...my memory of you from that moment in time may be very different to your own. Just for starters...I'm color blind. God bless you and all who sail in her...MAC

By this time I'd got my 1963 Premier kit, just like Keith Moon's from "That'll Be The Day". I wanted Premier because Neal $mith from Alice Cooper had a 23 piece mirrored Premier kit. He was 6'4" with hair down to his arse and was just the coolest looking guy I'd ever seen. I so wanted to be like him when I grew up. (I just made 6' and I'm bald. That's reality for ya!)

Anyway, Danny Jackson and I used to sit in his bedroom making beautiful noise together, me with my Premiers, and Danny with his Gibson SG and 100watt BAEZ. We made movie soundtrax, racing cars, airplane crashes, explosions, machine guns, NOISE !!!! We eventually enlisted Mick Visser (who grew up to become Mike Vee, father of Amy) on bass and Mick Reilly (a blonde haired Aussie surfer version of Roger Daltrey who grew up to become a detective) on vocals. The music was experimental heavy stuff based on Zeppelin, Sabbath, Hendrix and Ted Nugent. We named ourselves after the hit by Heart.

Danny and I were still in school and it was cool to be turning up at school in the morning after being out all night gigging in some club till 3 or 4 in the morning. These were the days when support bands had to supply loaders or attract the wrath of the headliner's crew. We made sure we were there for the "in" and waited round for the "out". We had a great time hanging with and learning from Borich, Chisel, TMG, Angels, Swanee, Tatts etc. I recall being shocked to find Angry humping some girl in the truck while Bear and I were lugging boxes out of Swansea Workers. Bear just tapped Angry on the shoulder and told him to hurry up or he might find himself squashed between a pair of concert W's.

I always loved talking to the drummers from the headline bands and getting tips on everything from drum tuning to how to roll better joints. I have very fond memories of conversations with John Annas (Kevin Borich Expres), Pete Macfarlane (Finch), Barry Cram (Contaband), John Lalor (Dallimore), Herm Kovac (TMG) and the dearly missed Dallas "Digger" Royal (Rose Tattoo). It was at Digger's insistence that Bear cut a hole in the front head of my newly aquired 24" Ludwig kit drum. I was weeping internally but holding a brave face up front.

I also met a number of guys in the main acts who I would later work with including Dave Hinds, Rockin Rob Riley, John Dallimore, John Swan, Jeff St.John and Dennis Wilson. There was a real sense of camaraderie, possibly even a mentor program going on, between these older musicians, and us kids in the support band. School Of Rock, absolutely !!!!

We rehearsed in the old Sun building up the top of town, directly opposite the nurses' quarters at Newcastle hospital. Our room on the 3rd floor had direct vision across the street, and guys from the other bands would gather on our call when ever any of the young ladies were undressing with the blinds up. Most seemed unaware of our lascivious gazes from the rooms across the street, others became aware when some idiot, usually a bass player, yelled out some obscenity, and got pissed off (fair enough). Some of the girls actually had a lot of fun with us, flashing their boobs, doing little dances, joking with us from their windows, in a bizarre Romeo and Juliet type scenario. What can I say ???

I realize now our actions were highly inappropriate, (even somewhat illegal), but we were kids, and it was the 70s after all.

Playing the Civic Theatre in the inaugural Rayworth's Battle Of The Bands.

We had fire on the guitar and set off pyros from the drum kit that almost set fire to the dress circle area. (Signs of things to come) (see Freakshop) We were told to stop our performance immediately. We didn't.