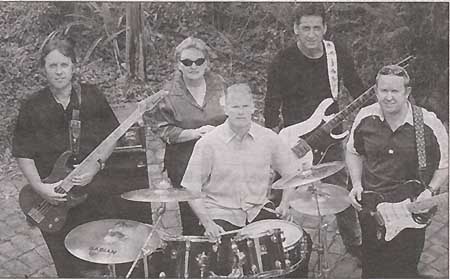 Remember the days when you could go to your favourite pub or club and see a live band? Blue on Black remember those days well and the band has ensured that punters still have the opportunity to go out and hear a full band perform live.

"It's tough cutting it as a five-piece band these days", guitarist and vocalist Mark Loveday said.

"The basic economics of the club and pub rock scene has meant downsizing line ups."

Blue on Black has worked hard to provide punters with all of the classics hits you can dance to and draws its i luences from a range of musical styles covering everything from rock to country to soul.

The band is fronted by vocalist Irene Simmonds who shares vocal duties with four other members of the band.

This gives Blue on Black a diverse appeal with each member able to cover a variety of styles from the 60s through to the 90s.

The band's growing set list includes classics such as Unchain My Heart and Folsom Prison Blues, as well as new tunes like Greenday 's Warning.

Loveday said that the band prided itself on keeping audiences happy. "You really have to listen to the audience, there are songs that don't work, no matter how much you like playing them yourself, you drop them and move on."

Vocalist and bass player Ian Osborn and drummer Gregg Noonan said that "the band was constantly amazed at how good music has the ability to transcend age groups. We have played for young and old audiences and they often enjoy the music from opposite ends of the spectrum to what you would expect. The classics like the Rolling Stones, The Beatles and Joe Cocker never die."