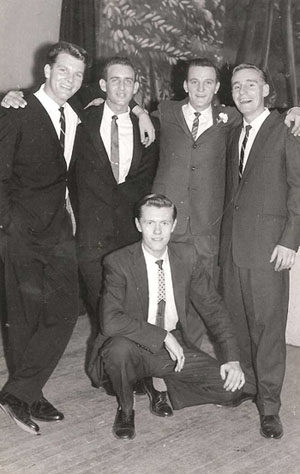 This group originated from a youth organization then known as "The Order of DeMolay" sometime during 1955/56. The organization used to meet fortnightly at the Masonic Hall in Hanbury Street Mayfield. At the end of each meeting, we were left to provide our own entertainment, until we left for home. At this time, Philip Maddocks, Ronald Burgess, Eddie Mink, David Mink, along with me (Garry Sullivan) used to gather around the piano to provide some form of entertainment, (if you could call it that at the time).

It soon emerged that there was some sort of sound that could have been made useful, and we decided to pursue whatever may have been available, to see how far it could go. After much practice, it soon became evident that we had a "sound" mostly in four part harmony.

After a short period, David Mink declined further involvement and the rest of us pursued what we considered could result in an opportunity to take the group toward entertaining at a public level. This we did, with a variety of success and failure, but none-the-less we persevered, and went on to moderately successful club appearances. After a few years, of club work, we were faced with the introduction of television in 1956.

Through Matthew Tapp, (then an Announcer at radio 2KO Newcastle), whom we had performed many charitable performances for 2KO, he put us in contact with ATN Channel 7 in Sydney, whereupon we appeared on the "Keith Walshe Youth Show" a half hour video taped programme. Having done 3 or 4 shows, we found ourselves appearing on "The Johnny O'Keefe Show" - "Sing Sing Sing along with such artists as Warren Carr, Kevin Todd, Laurel Lea, Lana Cantrell, Jimmy Little and many more.

This television association was further enhanced in the introduction of NBN Channel 3 at which time, again through Matt Tapp, we went to work for them for some fifteen weeks until the show was unfortunately "Axed".

Not long after this, a member of our group, Ronald Francis Burgess, was sadly, killed in an industrial accident at Newbolds in Mayfield.

It should be mentioned that we appeared on the radio programme (Australia's Amateur Hour - with Dick Fare), at the Roxy Theatre in Beaumont Street Hamilton, only to be beaten by Billy Jones and his band "The Harbourside six" we wished them good luck in their win.

Sadly, after Ron Burgess's death, the group disbanded, and this now brings about a whole new group, "The Cumberland Trio" Refer to the site as listed herein.