I was playing regularly every Saturday night in the Maitland Presbyterian Hall in the early 1950’s when friend Peter Varley asked if I was interested in forming a band as he was learning the trumpet. The name was thought up by Peter as The Hi-Fis.

Hi-fi music was all the go at the time and I agreed on the name.

The very first band to play under this name consisted of Peter Varley (trumpet), Allan Greedy (drums), Garth O’lauchlan (saxophone) and Neville Swan (piano). This band played at many cabarets, weddings and parties.

New Members in the band

Pianist Neville Swan was replaced by Craig Gleeson. Barry Campbell (vocalist) Garry Gleeson (bass Guitar) and Brian Watson (guitar) became members of the band. By the late 1950’s the band was starting to get popular around the Hunter Valley.

Still in the late 1950’s I was at the Hunters Gym in High street Maitland when the owner Jeff Dowsley asked if I was interested in starting a dance at the Cessnock Town Hall for a regular Saturday Night dance.

Jeff Dowsley with promoter Stan Saroff and the Hi-Fis started a very successful dance drawing in crowds from the very first night.

The band played many dances around the Hunter valley including Cessnock Showground on Sunday nights and a very successful dance at Kurri Kurri Ambulance hall on Thursday evenings.

Still in the late 1950’s I was at the Hunters Gym in High Street Maitland when the owner, Jeff Dowsley asked if I was interested in starting at Cessnock Town Hall for a regular Saturday Night Dance. Jeff Dowsley with promoter Stan Sarrof and the Hi-Fi’s started a very successful dance drawing in big crowds from the very first night.

The band played at many dances in the Hunter Valley including Cessnock Showground on Sunday nights and a very successful dance at the Kurri Kurri Ambulance Hall every Thursday night.

In the early 1960’s Ken Jones owner of Ken Jones Music Shop in Maitland who was a saxophonist in Gordon Favells big band at the Newcastle Palais Royal asked me if we were interested in auditioning for a permanent gig at the Newcastle Palais supporting Gordon Favell’s big bad on Saturday nights. After our audition we were successful and started playing at the biggest venue outside of Sydney. We started at the Palais with members Brian Watson (guitar) Garry Gleeson (Bass) Craig Gleeson (piano) myself on drums and Neil young (Flemming) our vocalist. It wasn’t long and Don Frazer joined us on Sax.

By the early –mid 1960’s we had Barry Livermore and Jan Porter out front as our vocal. This was our greatest time as we were the (resident band on the TV shows (Saturday Date, Swallows Senior, Teen Beat and Tempo) also playing one national show with compare Jimmy Hanlon. Most of the top artists e.g. Bee Gees of Bandstand and Six O’clock Rock we were resident band at the Palais on the TV shows. The biggest crowd we played for was 1967 New Years Eve there was 2680 in the Palais and a surf stomp at Nobby’s Beach.

We also played in Sydney at Five Dock RSL. Also, at the time the Hi-Fi’s had a fan club with hundreds of members across the Hunter Valley. Members received an autographed photo of the band up on stands playing on a TV show. Our 45rpm were played on jukeboxes in Newcastle.

Many changes happened at the Palais over the eleven years (1960-1971) with different members coming and going, Garry Gleeson, Craig Gleeson and myself left the Palais to play at the Savoy Theatre Restaurant under musical director Horry Dargy of the Horry Dargy Quintet fame. Leaving Donnie Farnham (vocal) and Garry Murray (Guitar) playing in the Hi-Fi’s at the time to carry on the name.

After a period of time we left the Savoy and Craig, Garry and I formed a new band in the early 1970’s called “Revival”

AND THE REST IS HISTORY.

The Hi-Fi's have been playing Rock and Roll in the Hunter / Newcastle NSW area for the past 50 years. Enjoying the popularity of the big dancehalls of the 60's (Newcastle Palais Royale) to the larger clubs of the 2000's

Photograph above courtesy of Bryan Bronner.

This story is about two bands that eventually merged as one, the other band being.

Beginning on 20th August 1959 at Cessnock Police Boys Club as a five piece group called “the Mystery’s” they won a position in August 1964 to play alongside the resident Rock and Roll band ”The HI-Fi’s” at the "Palais Royale" dance hall in Hunter Street Newcastle. 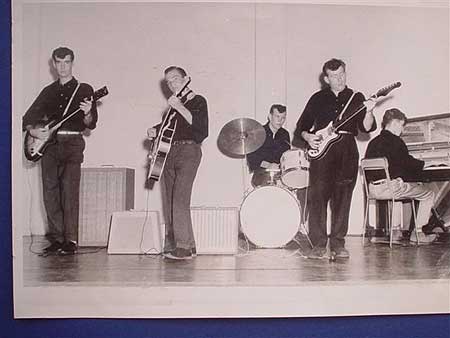 The two groups eventually merged into one under the Hi-Fi’s name, and in 1968 when Bobby Le Brun opened the Savoy Theatre Restaurant in New Lambton, he took the original Hi-Fi’s Pianist (Craig Gleeson) Bass player (Garry Gleeson) and Drummer (Allan Greedy) to back his artists.

The remaining members of the band Garry Murray (guitar), Les Murray (guitar) (RIP) and Donnie Farnham (vocals) were from the original Mystery’s and so they recruited their old Bass player (Gary Hafey) and Drummer (Alistair Wilson) back to the group, and so in 68/69 the “Mystery’s” became the “Hi- Fi’s”.

They are now a three piece, and have virtually grown up with Rock and Roll, and the songs that they still play are just as popular now as they were originally.

Their dedication to a set dance tempo has kept them in high regard and demand over all of those years.

They have shared the stage in their early years as a support band for Billy Thorpe and the Aztecs, Ray Brown and the Whispers, Little Pattie and Dinah Lee.

Most of their success has been as a dance band turning their hand to the various styles but always maintaining a variety of Rock and Roll in their programme.

Guitarist, Garry (Gus) Murray, who plays an excellent rhythm and lead guitar, as well as vocals and backing harmonies, and also features the great instrumentals of the "Shadows" in between sets.

Alistair Wilson on Drums and lead vocals, has been playing music with Gus since they were 14 years old at High School in 1959.

Garry Gleeson on Bass was one of the original band members when the HI-Fi’s formed in Maitland in 1956, he has returned to play with the band after an eight year break, enjoying a retired lifestyle.

Their years of experience with music, dances, etc can be attributed to their presentation and dedication as teenagers, which have maintained their popularity to this day.

A Timeline History of The “Hi-Fi’s” 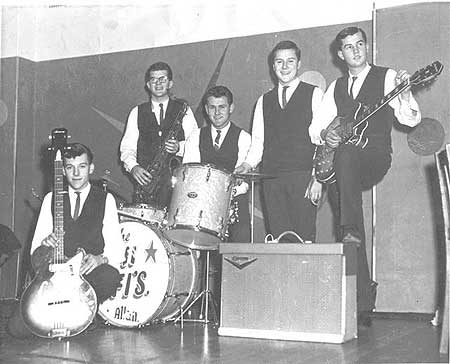 John Freebairn (vocal) and Peter Whiting (piano) were included, but were replaced later with Garry Hafey (bass) and Donnie Farnham (vocal) and called themselves “The Mystery’s”

The Hi-Fi's become the resident band at the "Palais Royale" in Hunter Street, Newcastle. 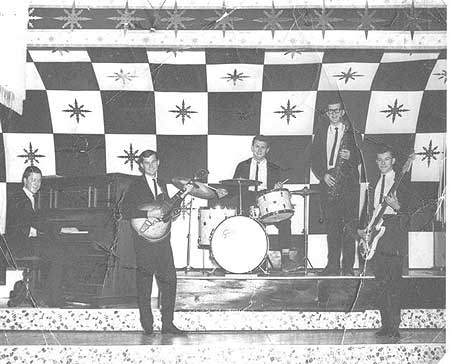 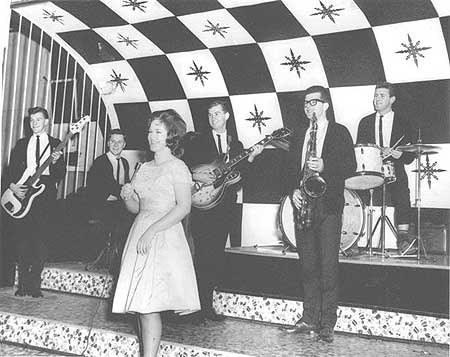 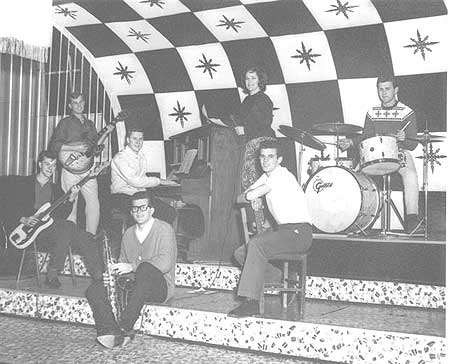 Photographs above courtesy of Alistair Wilson. 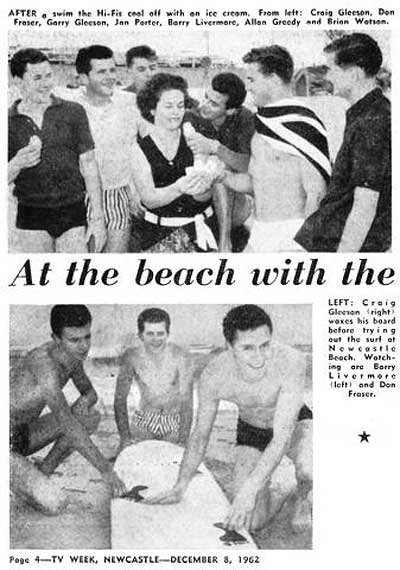 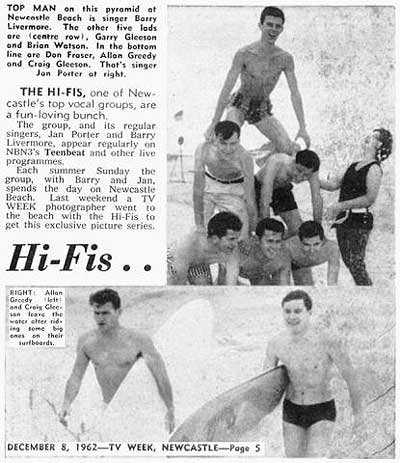 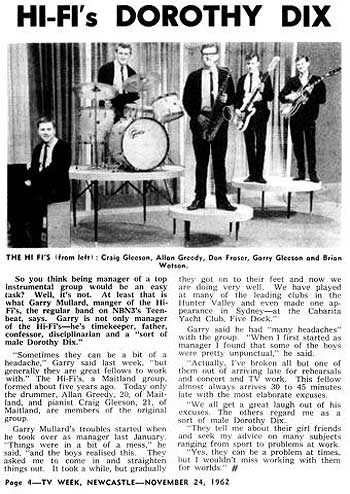 Clippings above courtesy of Alan Greedy and Tom Wynn. 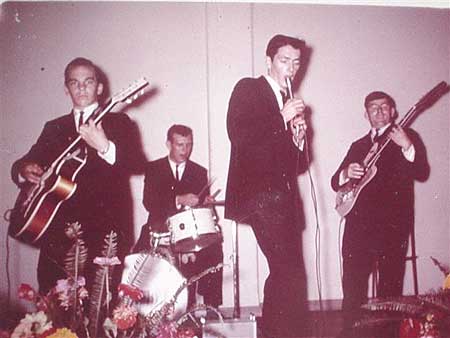 The Hi-Fi’s finished at the "Palais Royale". Garry Hafey had left the group and Les Murray wrote the song “Don’t Knock the Knock’s” we recorded it at Vista recording studio’s Newcastle.

That year Cessnock Goanna’s won the 72 comp and the song became a local hit!!

Sadly on the 11th January Les Murray passed away, which left only three in the band Garry (Gus) Murray on guitar, Alistair Wilson on drums and Donnie Farnham on bass and vocals. 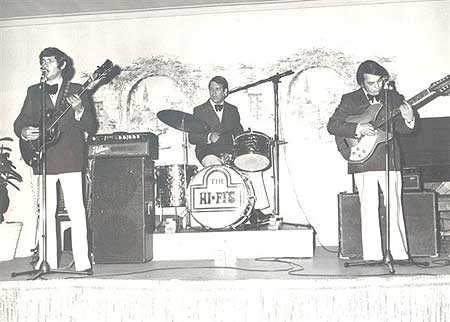 Began playing at Maitland City Bowling Club on Sunday evenings as resident “Old Time Dance Band” during the next few years Alistair began to sing some of the lead vocals and wrote several songs for the new vogue dances. 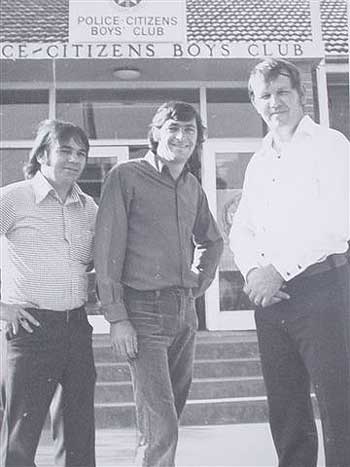 Donnie Farnham was replaced by Garry Gleeson (an original Hi-fi) on bass.

Alistair wrote the words and Gus the music for a song called “Lay in the dark and think of you” as a tribute to Roy Orbison. They recorded it in Kurri and it proved a popular request over the next few years.

Garry Gleeson finished up and was replaced by Bruce Campbell on bass. Alistair wrote and recorded a song for the Newcastle Knight’s called “the Knight’s are here” it received some air play on the radio but sadly failed to make it as a signature tune for the team despite all efforts and good intentions.

We are still playing our music although the performances are only a few dances per month but we like to think it is more quality than quantity these days.When we began to play for dances all those years ago we set ourselves some disciplines that we have adhered to ever since. We have never had a leader of the group, each member has tasks to undertake, and we have always attempted to wear a presentable uniform on stage and have never smoked or drank alcohol on stage. And we have never worked for an agent in all that time, over the years we have built up a repertoire of music and songs that enables us to play rock and roll, old time, new vogue, dinner music, ball’s and weddings etc. Our favorite instrumental group was Cliff Richard’s “Shadows” and Gus has recently acquired some backing for the shadows songs and enjoys playing some of them in between sets.

We have had a great association with the Westpac helicopter fund raisers over the last 15 years and have run successful dances and played Drayton’s post vintage family day at the winery every year. It is a very worthwhile organization and we are proud to be able to do our little bit to help out! Thank you, for attending this evening and doing your little bit to help them out!

Other photographs and clippings 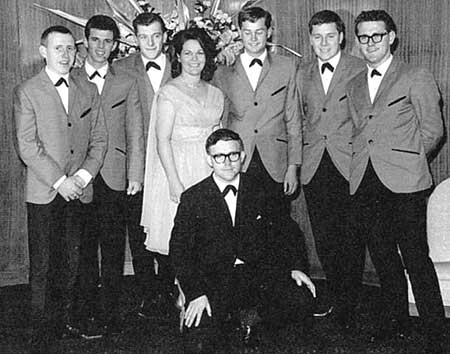 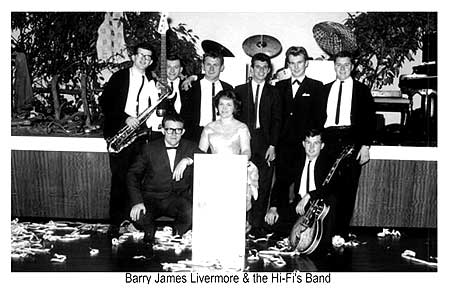 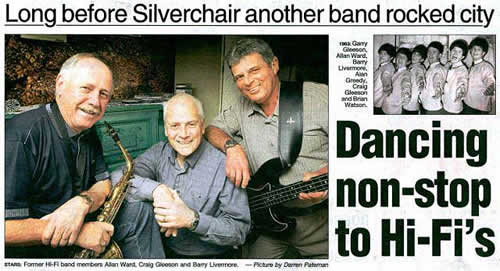 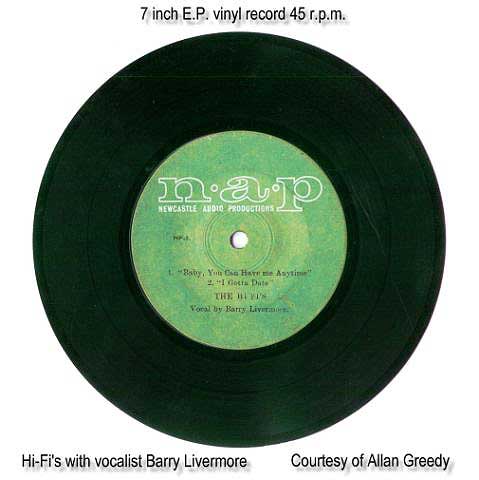 Above photographs and clippings courtesy of Alan Greedy and Tom Wynn. 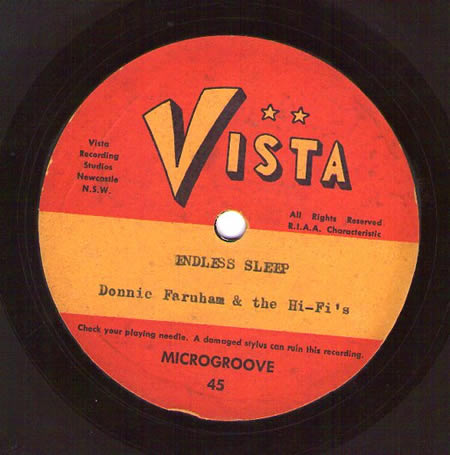 Above photograph courtesy of Gerry Bates

Editing and additional information added May 2015.

It’s hard to believe, that we are still enjoying playing our music to most appreciative audiences, our performances are certainly less than we were used to, and the venues definitely different.

And because there are only two of us left, we decided to change our name from the “Hi-Fi’s” to the “Elderly Brothers”.

We have found that the music we have played and loved over the years, is also appreciated by the folk who live in over 55 lifestyle villages, retirement villages and caravan parks, so we have been concentrating on playing for them, they always have requests, sing along with us, put a few dollars in the hat and are happy for us to play a few hours in the afternoon, (cheerin).

Gus still does a segment on the “Shadows” he plays all their popular hits and some rare ones as well.

Every winter for the last four years we have been having a holiday in Bowen, Tropical North Queensland, we stay at Horseshoe Bay Caravan Park and play music every Thursday afternoon.

The Bowen Lions club book us for some performances at their Sunday markets on Queens Beach, and we’ve do a few dinner dances at the Bowen Golf Club. We are certainly popular.

Blacks Beach Caravan Park in Mackay are always glad to have us play there on our way home, as well as Elliott Heads Caravan Park near Bundaberg.

When we first began playing as I have mentioned earlier we decided not to have music on stage, and we would learn everything we played, it was for a presentation point of view then, but it has certainly paid off for us as Gus can remember the chords etc and I can rattle off all the words for songs we have played for years, not bad for a couple of elderly gents who are both approaching 75.

I am very grateful to Kevin for keeping the Newcastle bands database going, and to all the dancers who read our history, I thank you for your attendances and support over the years.

And to the organisations and clubs who provided the venues and put dances on for us all to enjoy.