The Mystics was formed in 1964 as a cover band for The Shadows and other guitar instrumental bands at the time, e.g. The Ventures, The Atlantics, The Invaders among others. This was also the start of surfing music, which mainly featured guitar instrumentals, e.g. Surfside, Bombora, The Cruel Sea etc. The band did a number of dances during that year at venues throughout Newcastle and The Central Coast. They also did a regular Friday night dance at Argenton Hall.

At one stage, the band was selected to replace The Vibratones for two weeks at a dance in Swansea whilst they fulfilled obligations in Sydney at Surf City. The Vibratones, shortly after, included a couple of vocalists, namely Ricky Wayne and Johnny Noble before settling on Billy Thorpe. They then changed their name to The Aztecs and the rest is history.

The band was rather “chuffed” at replacing The Vibratones as we were never in their league.

At the end of 1964, Mike Stevenson left and was replaced by Ron Carmichael RIP. The band then changed their name to The Tremors.

Rick Pointon had numerous successes with many bands and Warren Tiplady relocated to The USA where he taught guitar and played with a number of bands. I lost touch with the drummer, Trevor, and do not know whether he continued in music. 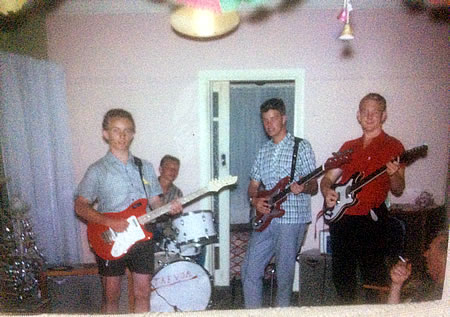