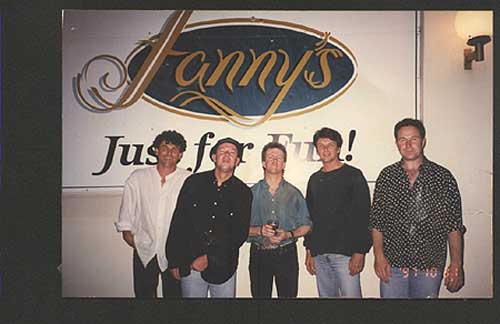 The year was 1996, vocalist Ross 'Rex' Melville, drummer Mark Robinson and bass player Brett Carson, (after twelve months break from 'Radio Gaga'), decided to get back together and recruit some new players. They were after two lead guitarists. First on board was Dave Eyre, then they thought of an another axeman Tony Hobbs. He was keen but due to some personal issues had to bow out, it wasn't long after that Tony was found dead in a toilet cubicle in the Delany Hotel. He died of a heroin overdose. R. I .P. Hobbsie.

Next in line was a guy from Maitland a local legend and all round nice guy who Mark had always respected and admired. His name was Michael Punch. He was approached, and he made up the fifth member of the 'Swell'.

Intense rehearsals followed, they hired out the dogbox over at Mayfield. It was a set of rooms under this house that reminded me of a dungeon. There were 4 bands in different rooms playing at the same time, no air, and in the middle of summer, you had to go through a number of chambers to get to your room. On the way in you had to fight your way through the barkers eggs in the back yard and then past Fido!
All this and carrying your gear as well!

From memory our first gig was back at our own haunt Fanny's Tavern Anzac Day night Friday 1996. It was great having Punchie in the band; he always had so much enthusiasm and great stage presence. Our repertoire consisted of songs by great Australian acts such as 'Choirboys', 'Crowded House', 'Australian Crawl', 'Hoodoo Gurus', 'Mentals', 'Dragon', 'Mondo Rock' and 'Richard Clapton'. As well as a couple of surf instrumentals, 'Telstar', 'Pipeline' and 'Misourlou' thrown in for good measure. We decided just to work a couple of venues, they were The Hotel Delany, Beach Hotel Merewether, S J'S Nightclub Hamilton, The Phoenix Club Mayfield, and of course Fanny's.

One of gig we did was for charity, it was the 2000 'Surfest Ball' at Wests League Club, where the 12 best surfers in the world were there, for the first time together on stage. 'The Screaming Jets' came on before us doing an unplugged set, and then we followed with an electric set of Oz rock. The Johns brothers were on the dance floor and a good time was had by all.

One of the other great gigs we had was the day the Newcastle Knights won their first grand final and we were at the Beach Hotel on Sunday arvo. I remember thinking it was going to be a very long gig, because they were losing, but lo and behold right at the end when they came through, it became one of the best gigs we had ever done. We played the Knights theme every fifth song, people were coming in literally in their droves, and free beer was on offer, (yee haa! Go the Knights!). It was a start of a weeks long celebration if not a fortnight.

After bringing New Years Eve 2000 in at Fanny's, (no y2k bug to be seen) and 3 years of the same gigs, the same songs, and show us your tats and your tits, Ross decided to pull the pin on the 'Swell'. The rest of the band formed up with a female singer, and with a new repertoire and new name. They started playing around the traps and would become 'Misbehave'.

Occasionally the 'Swell' dusts the sand off their shoes and gets back together for a corporate gig or a one of show just for fun. 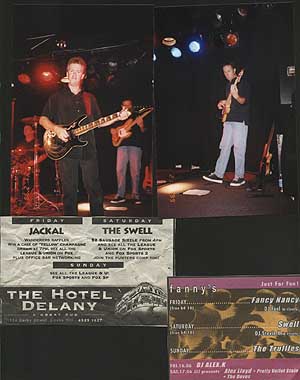 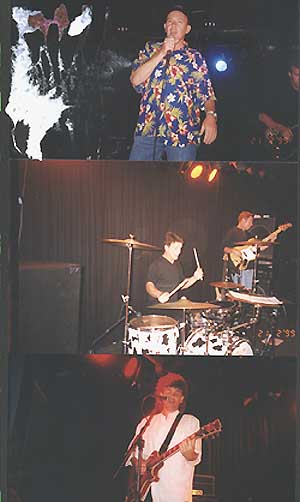