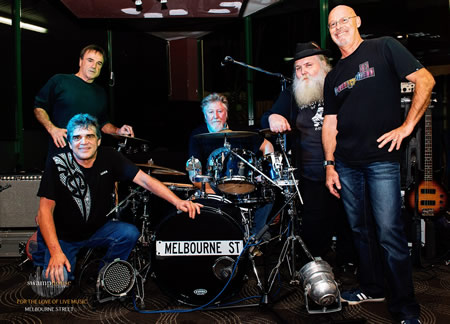 Having the arvo of from gigging I managed to catch the ever amazing Melbourne Street @ The Premier Hotel. Their first time at that venue, thanks to Phillip Boon for making it happen, where they turned on a magnificent performance. They made a huge impression on many of locals at that venue that hand't seen them before. Playing three amazing sets of tunes that brought back memories to many of the packed venue.

Melbourne Street have now turned themselves into one of Newcastles most astounding acts over the past months, drawing bigger and bigger crowds with their monster hits of decades past, that kept the venue grooving all night long.(The dance floor was packed from the start of each set to the end.) A good testimony if any that they can keep your groove happing.

The beauty of Melbourne Steet, is that they play what other band don't play or would attempt to play, this is what makes Melbourne Street so unique, (you see them once and you can't wait for their next performance)

Not to mentioned the musical calibre of their musical skills, with Choc Eriwata, formally of The Witch Doctors, King Hit, The Mal Eastic Band and can also be found playing with The Blues Bombers, a remarkable vocal talent, he hasn't lost anything over the years, in fact Choc is singing better than ever. Not leaving the other members of the band behind, Ian Crawford on drums and vocals, another true and tested musician, he also still has what it takes to deliver an outstanding performance. Nick Croft on guitar is one of the Newcastles finest at his craft, also with Paul Thompson on bass and Wayne Humphris on keys, well in short as powerful band of talent.

*It was also wonderful to catch up with some friends and other local music identities that I haven't seen for awhile supporting the live music industry.* A wonderful arvo out.

(Just a note, for band and production crew, if any critistism is due about the gig, the only thing is that some lighting with the production would have added a little more atmosphere to the performance, whether is a day gig or not a little lighting goes a long way and a watch on stage volume may need some awareness from some band members.)

So wanna see one of the best, well Melbourne Street will be gracing the stage at The Mezz Bar, @ Wallsend Diggers on March 25th which in turn be filmed and recored live on the night. So come on down and get involved, you won't be disappointed.

* The Mezz Bar the best venue in the suburbs.*